Inspired by fundamental Jewish values – Repairing the World, (Tikkun Olam) and Acts of Kindness (Gemilut Hasidim) – we acknowledge our history as immigrants and remember the commandments to “Remember the stranger” and “Pursue justice.”

1.    Education: We develop educational opportunities on immigrant/refugee needs and issues. We want to create and maintain an immigrant-friendly environment in our own congregation.

2.    Activism: We provide opportunities for congregants to work as individuals and together in acts of volunteerism and in promotion of social justice for immigrants and refugees.

3.    Networking outside of JRC: We foster affiliation and collaboration with other congregations (both Jewish and interfaith) and with community organizations, for education, volunteerism, and social action. 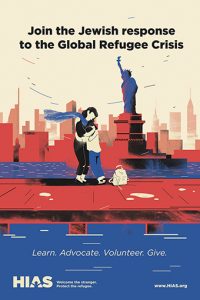 On February 8, 2017, the JRC Board agreed to join about 300 Jewish congregations across the country in supporting the HIAS Welcome Campaign. HIAS (Hebrew Immigrant Aid Society) has been there for Jewish refugees for 130 years, and continues its mission to rescue people whose lives are in danger for being who they are, regardless of religion or background. To carry out these values, JRC will be working with HIAS Chicago and with other Chicago-area Welcoming congregations. Mishkan Chicago and Temple Jeremiah have already welcomed families. Lakeside Congregation, Temple Sholom and Anshe Emet are waiting for their families to have their travel booked. On Sunday, April 2, 2017, at JRC, we gathered to celebrate becoming a HIAS Welcoming Congregation and to meet and talk with others working toward the same ends. To become a HIAS Welcoming Congregation, JRC has affirmed the statement, below:

We, Jewish congregations and communities from around the country, are signing onto HIAS’ Welcome Campaign as an affirmative statement in support of welcoming refugees to the United States.

With over 65 million people displaced from their homes worldwide, we see the plight of contemporary refugees as simultaneously an alarming global crisis and an issue that resonates very deeply with Jewish history and values. Throughout history, the Jewish people have been forced to flee persecution and seek safety in other lands. Throughout history, we have been refugees. Today, inspired by the biblical injunction to “welcome the stranger,” our communities call upon the government of the United States to rise to the leadership that this crisis warrants.

Individually, we, the congregations on this list, are taking action in a variety of ways including: educating others about refugees, advocating with elected officials, holding events and programs, raising money to support refugees, building partnerships and helping refugees in our local communities.

Together, we, the congregations on this list, comprise a powerful Jewish voice in support of refugees worldwide.

The Immigrant Justice Task Force regularly conducts educational programs at JRC, on topics such as Sanctuary, “How to Stop a Deportation,” and creating the Immigrant Justice Quilt. We also have workshops on volunteer opportunities, and participate in creating religious services.

Task Force members participate in training provided by ICIRR (Illinois Coalition for Immigrant and Refugee Rights), the OCAD (Organized Communities Against Deportations) and Refugee One.

Interfaith Committee for Detained Immigrants
The Immigrant Justice Task Force participates in many activities sponsored by the Interfaith Committee for Detained Immigrants, a non-profit, faith-based organization of staff and volunteers called to respond actively and publicly to the suffering of all individuals and communities affected by immigration detention, deportation, and post-detention through pastoral car, advocacy, public witness and other activities.

Vigil at Broadview Detention Center
On the first Friday of every month, JRC members, student groups and families travel to the Broadview Detention Center to stand in solidarity and prayer with those being deported and with the families of those in detention or facing deportation, and to be a public witness to the injustices of our broken immigration system. The vigil starts with a short, participatory, multi-religious service. Then we read the names of those who are being deported that day from that site. Meet at JRC at 5:45 am to car pool.

Post-Detention Support Packs
Many just-released men and women have nothing more than the clothes on their backs, many times the clothes they were wearing when they were taken into custody (i.e. pajamas, work clothes, summer clothes, etc.). Help pack up support packs that include clothing and hygiene products to help in the transition out of immigration detention.

Hospitality Houses
For those that have nowhere to live during the transition process, there are three homes for long-term residence while individuals are awaiting future court dates or waiting for work permits. JRC responds to needs expressed by the houses.

Court Watch
Students, religious leaders, and people of faith serve as a presence in the Immigration Court to let those involved in the court system know that people are watching and care about what happens to our immigrant sisters and brothers.

The Unaccompanied Children’s Interfaith Ministry
Adults spend a few hours with children and teens who are diverse in almost every way imaginable, representing different countries, language groups, religions, and socio-economic backgrounds. We especially need people who speak Chinese, Spanish, French, Rumanian or other languages. We also need people to create art or activity boxes to support this program. Visit the Unaccompanied Children’s Interfaith Ministry for details.

Sanctuary Movement
In the late 1980s, JRC was part of the Sanctuary Movement, when we worked in many ways to support the Hernandez family. We are not a Sanctuary Congregation at present, though the Task Force has supported other congregations, including our neighbor, Lake Street Church. Currently, we are educating ourselves about ways in which JRC can participate. Would you join the discussion?

Domestic Workers Bill of Rights
In concert with JCUA (Jewish Council for Urban Affairs), JRC’s Peace Dialog and Worker Justice Task Force, and many others, we contributed to the movement that resulted in the passage of the Illinois Domestic Workers Bill of Rights (DWBR). Now that the bill has become law, our next step is to integrate the implications of the DWBR for JRC members at work and home, and to be available, if asked, to support domestic workers unions.

CRLN Immigrant Welcoming Congregations
The JRC Immigrant Justice Task Force coordinates with the CRLN (Chicago Religious Leadership Network) as part of their interfaith “Immigrant Welcoming Congregations” (IWC). There are about 20 affiliated congregations, of which JRC is currently the only Jewish member. In Evanston, St Nicholas and Lake Street Churches are sister IWCs. Both are actively involved in direct actions and need our support. For example, in early February, 2017, the IWCs formed an early response team. JRC could become more visibly active supporting and strengthening Evanston as a sanctuary city.

If you are interested in any of the activities on this page, please send a message to the Immigrant Justice Task Force Chair, Edie Cantor, at jrcimmigrant@gmail.com for more information.